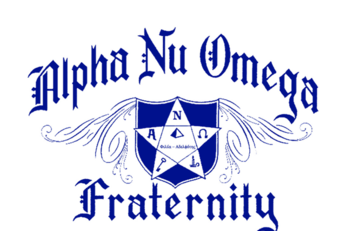 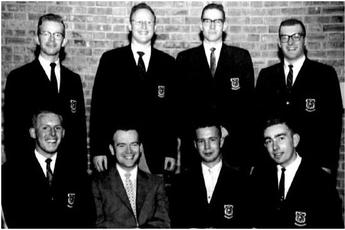 FOUNDERS
Alpha Nu Omega's heritage derives from the ideals and dreams of our Founders. While these men were on campus, they earned recognition in many areas. Below are descriptions of our Founders' accomplishments before and during their years at UMD.

Thomas William Kraus attended Ohio Wesleyan University from 1955 to 1957 where he was a member of Phi Delta Theta national Fraternity. He entered the United States Army in October of 1957 where he remained until his separation in April 1958. Mr. Kraus received a Bachelor of Arts degree in Business and Economics from UMD where he minored in Political Science. Being an outstanding student and interested in his school, Mr. Kraus was active in many campus organizations. He served as President of the Student Association and Wesley Foundation during the 1959-60 year. In recognition of his achievements at UMD he received the Arrowhead Award in 1959 and the Bulldog Award in 1960.

Charles Gary Holzer attended Grinnell College, Grinnell, Iowa, in 1953-54. He entered the United States Air Force in January 1955 where he served until his discharge in October 1958. Entering UMD that fall, he lost no time in becoming active in many campus organizations. He served as Commissioner of National and International Affairs and Commissioner of Rules and Elections. Mr. Holzer was also elected to the position of President of the International Club. For his outstanding accomplishments he received the Arrowhead Award in 1960. Mr. Holzer received a Bachelor of Arts degree in Political Science.

John Charles Eckholm distinguished himself in the service of our University. He served as Program Coordinator of the International Club during the year in which it won the "Outstanding Student Organization" Award. He was also active on the Student Association's committees for Student Responsibility, National and International Affairs and Student Welfare. Mr. Eckholm graduated in 1960 with a Bachelor of Arts degree in Political Science, becoming Alpha Nu Omega's first alumni member.

Robert George Pike graduated in 1960 with a Bachelor of Science degree in Industrial Education and was an outstanding worker both in and out of our University. At UMD Mr. Pike served as President of Kirby Student Center and for his achievement in this office and for his work in other campus organizations, he received the Arrowhead and Bulldog Awards. Outside of school Mr. Pike has received recognition for his many years of working in the Scouts. He was the recipient of the Eagle Scout with Silver Palm Award and the Explorer Silver Award and the God and Country Church Award. Mr. Pike also served in the Army from August 1954 to July 1957.

William E. Peterson attended Wilson Junior College in Chicago before entering UMD. Mr. Peterson's activities included the Business and Accounting Club, the Inter-fraternity Council, and Student Assembly. For his distinguished and valuable service in each of these fields he received the Arrowhead Award. Mr. Peterson graduated in 1960 with a Bachelor of Arts Degree in Business and Economics.

Richard E. Pease received a Bachelor of Science degree in Biology in 1960. Mr. Pease demonstrated his diversity of experience in many fields. He served as the Arnold Air Society Comptroller and received a letter in track for two years, belonging to the "M" Club. Mr. Pease was also active in Student Association where he served as a representative for two years. For his outstanding work on campus, he received the Bulldog Award in 1960.

Gerald Richard Maeckelbergh set an example in achievement for every Alpha to follow. Mr. Maeckelbergh was the first brother to receive the "Brother of the Year" Award. Not only did he serve the Fraternity to his fullest but also his University. He served as President of the Newman Club and was a representative to the Religious Council. Student Association obtained some of his valuable time when he served as Commissioner of Public Relations. In recognition for his outstanding qualities of leadership, Mr. Maeckelbergh received the Bulldog Award in 1960. He graduated in 1960 with a Bachelor of Science degree in Social Science.

Lynn Douglas Jamison graduated in 1961 with a Bachelor of Arts degree in Business and Economics. Mr. Jamison served 3+ years in the United States Air Force. While on active duty, he attended night school under auspices of the University of Maryland, attaining standing as a sophomore before coming to UMD. He displayed wide ranging interest in campus activities including chorus, United Christian Conference Fellowship, Religious Council, Student Council and the Interfraternity Council.  Mr. Jamison served as president of the Religious Council during the 1960-61 school year. He was a Representative-at-large to the UMD Student Association in 1959-60 and also served on the Interfraternity Judiciary Board. For achievements and noteworthy contributions to campus life, he was awarded the Arrowhead Award in 1960.. 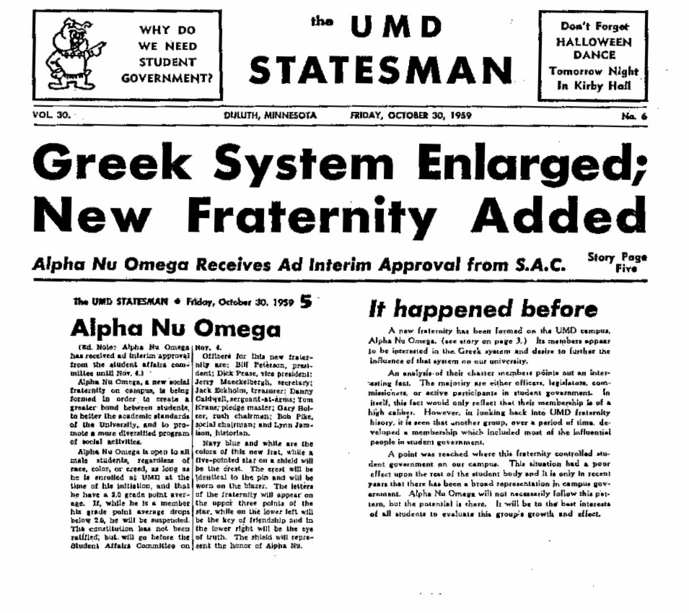 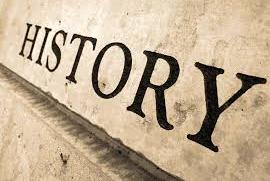 INTRODUCTION
"History," says Webster, "is the record of past events, especially concerning those of human beings." History in any situation is that special, sometimes precious thing, which is meant to be preserved by and for the members of an organization for all time. The history presented here is no exception. The history of Alpha Nu Omega is definitely something to be cherished by all of its brothers - past, present, and future. Therefore, with this thought paramount in mind, this history is dedicated to Alpha Nu Omega; may it live forever.

THE BEGINNING
In the Spring of 1959, Thomas W. Kraus and C. Gary Holzer first conceived the ideas which ultimately lead to the founding and organization of our great Fraternity, Alpha Nu Omega. Tom Kraus and Gary Holzer began to transform their dreams into realities of a new fraternity at the University of Minnesota-Duluth (UMD). Their reasons for seeking a fourth fraternity for the UMD campus were essentially these: they found no existing fraternity which met their respective desires while at the same time belonging to the Greek movement; they felt that yet another fraternity at UMD would hasten the advancement of fraternities from local to national affiliation; and they firmly believed that a new fraternity would be of service to the University and the community.

In the summer of 1959, Tom Kraus and Gary Holzer brought two more interested men into their fold. These were John C. Eckholm and Robert G. Pike. Returning to classes in the fall of 1959, the remaining four charter members were taken into the fold. They were William E. Peterson, Richard E. Pease, Gerald R. Maeckelbergh and Lynn D. Jamison.

At this time, the name of the new Fraternity was agreed upon. It was to be Alpha Nu Omega - a name the charter members of Alpha thought proper and fitting because they felt the name would appear emblematic and significant of the high ideals and aims the founding members desired to attain through the years. Literally translated from Greek, the name was to read: Alpha (the first) Nu (the newest) Omega (the greatest).

On October 22, 1959, Alpha Nu Omega received its first ad interim approval as a campus organization. On December 4, 1959, the group was officially and formally declared a fraternity on the UMD campus.

INITIAL RUSHING AND PLEDGING
At the beginning of the Winter Session, 1960, the brothers of Alpha Nu Omega became aware of the need for additional members in order to keep abreast in competition with the three other fraternities on campus - competition being vital to the life of a fraternity. Thus on January 7, 1960, Alpha Nu Omega took part in the Inter-fraternity Smoker in Kirby Student Center at UMD. On January 8 and 12, two private rushes were held by Alpha Nu Omega. On March 2, 1960, the first pledge class was initiated and received their pins--the Blue and White shield--to wear proudly at all times.

"...to form a greater bond between students..."
- Academics
"...to better the academic standards of our University..."

- Social
"...to promote a more diversified program of social activities..."
- Cooperation
"...to secure greater cooperation among faculty, administration, and students..."
- Service
"...to deliver a program of service to our fellow man..."